Los Angeles, CA – Carlos Montes, a longtime leader in the Chicano movement, spoke out about the vicious massacre in Texas, stating, “We must condemn this mass killing in El Paso as a hate crime against Mexicans and Chicanos. President Trump’s racist attacks have emboldened white supremacists to commit violent crimes against Blacks, Muslims and now Brown people.”

Montes noted, “El Paso is a special city for Chicanos and the millions of Mexicans and Central Americans who have passed through el Paso al norte in traveling North. It is affectionately referred to as el corazon de Aztlan [the heart of Aztlan] in the Chicano nation.”

El Paso has a long history of resistance against racism and of labor struggles, like the two-year Farah strike in the 1970s. El Paso and Juarez city across the border share a common bond with familial, cultural and economic bonds.

Los Angeles, CA – Families, union members, teachers, activists and students filled the house at local Chicano art center, Self Help Graphics, Aug. 29, to commemorate the 48th anniversary of the Chicano Moratorium Against the War. The program honored the historic Aug. 29, 1970 Chicano Moratorium, where over 30,000 Chicanos marched in East LA to protest the high casualty rate of Chicanos in the Vietnam War. Well-known journalist Ruben Salazar was killed by a n LA sheriff deputy during the protests.

The commemoration was organized by Cento CSO, which continues to denounce President Trump’s threats of interventions and war against countries like Iran, Venezuela and north Korea. CSO also calls for U.S. Navy and troops to get out of the Philippines and stands in solidarity with the people of Palestine, Puerto Rico and Venezuela.

Raul Ruiz, former editor and photographer for La Raza newspaper, spoke as an eyewitness to the killing of Ruben Salazar.

Gloria Arellanes, a founder of the original Chicano Moratorium, Brown Berets and Las Adelitas, an anti-war woman’s group, spoke of the history of Chicanos fight against the Vietnam War and the leading role of women.

The event included a talk by Cruz Becerra, a Vietnam veteran, who delivered a message of solidarity from Bayan USA; and speeches by Dalia Jaramillo, SEIU 1000 Vice President and part of the Chicano Moratorium Organizing Committee; Sol Marquez-Freedom Road Socialist Organization, and Carlos Montes of Centro CSO.

Join Centro CSO for their public meetings the third Wednesday of every month 6 p.m. at Benjamin Franklin Library. Look for /Centro CSO on Facebook and Twitter.

To join us be sure to attend our monthly meetings – they occur every THIRD Wednesday of every month, 6:00 PM at the Benjamin Franklin Library

In 2016 Boyle Heights experienced 5 killings at the hands of killer cops. In all of these cases, the teens and men killed by LAPD were of Chicano or Latino nationality.

Since then, Centro CSO has been working hard to bring justice to each of these victim’s families, and have witnessed how our Black sisters and brothers have also been similarly attacked. This is why Centro CSO has united with Black Lives Matter – Los Angeles in pressuring District Attorney Jackie Lacey to do her job in prosecuting killer cops.

This fight is everything to us and we truly appreciate your support. Go one step closer and copy the link below:

Posting something on facebook or twitter will only take a second, but will mean that hundreds of people see the petition and can join our movement.

Tell your friends why you decided to sign the petition and why it’s important to you – people are more likely to offer their support if they understand why the people they are close to support it too!

Centro CSO is hosting a summer protest against LAPD to demand the jailing of all the killer cops involved in the murders of:

And in the brutality against:
Pedro Echeverría,
David Ezpeitia.

Join the families, their friends and loved ones, whom are asking that you help support them during their time of need. If we unite against the common enemy, we become unbreakable.

Centro CSO is a neighborhood organization; completely funded by the people. We are not a non-profit and we are not affiliated with any political parties.

Centro CSO is preparing to host May Day in Boyle Heights for the third year in a row, and is humbly asking for your help! 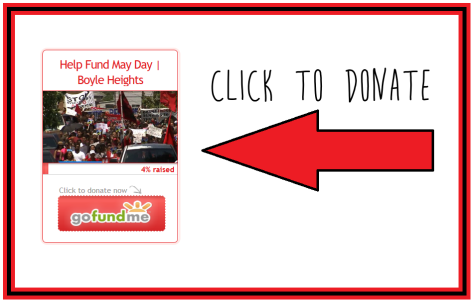 Some of our demands this May Day include: legalization NOT deportations, defend DACA, no to Bracero Programs, and no to U.S.A wars and occupations.

Items we will be using the funding for include:

The movement against the racist Trump administration will continue in Boyle Heights. Si se puede!

Join Centro CSO in PROTESTING to demand Jackie Lacey prosecute and jail killer cops. As District Attorney of Los Angeles, Jackie Lacey holds the power to investigate and prosecute killer cops for the crimes they continuously committ against the people.

Boyle Heights continues to come under attack with the fifth killing, this year. LAPD will not stop unless we continue to fight back.

Families of Jesse Romero, Arturo Torrez, Edwin Rodriguez, Jose “Peruzzi” Mendez, (and many other who have come forward since Centro CSO began organizing around these cases), will not rest until there is justice. Jail killer cops, release all videos, and justice for all of these victims of police terror.

Thank you to everyone who has come out to support. We have many actions planned! The most-updated social media outlets are our facebook and our twitter. Please follow both.

Be sure to join Centro CSO on August 6th for a movie night in Boyle Heights! We will be showing the movie Bread & Roses (see trailer below).

Bread and Roses is a 2000 drama film directed by Ken Loach, starring Adrien Brody. The plot deals with the struggle of poorly paid janitorial workers in Los Angeles and their fight for better working conditions and the right to unionize. It is based on the “Justice for Janitors” campaign of the Service Employees International Union (SEIU). (from wikipedia)

There will be a potluck and a discussion after the film about joining the labor struggle as working-class Chicanos and peoples in Los Angeles.

There was an error retrieving images from Instagram. An attempt will be remade in a few minutes.